Conception Vessel 21, Ren-21, Xuanji, is on the Conception Vessel, at the top of the chest. We should probably use it more in these sceptical times.
Jonathan Clogstoun-Willmott

Conception Vessel 21, Ren-21, Xuanji, Jade Pearl, is the 21st acupuncture point along the Conception Vessel, at the top of the chest. We should probably use it more in these sceptical times.

Its name denotes something of great value, but also is or was the name of a star, so connects the upper part of the sternum with the Heavens. To some acupuncturists this is a load of tosh; to others it suggests a point of great value, when rightly used.

On the sternum mid-line in the depression just inferior to the top of the sternum. Technically it lies at the level of the superior margin of the 1st rib. 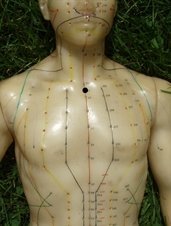 That’s all very well, but in some people, well-endowed with flesh, the first rib is sometimes obscured, so just let your finger drop into the point as it descends over the lip at the top of the sternum.

Needling and Moxa for Xuanji

Transversely up to 1 cun. Ideally needle downwards or towards where the chest feels uncomfortable. Up to 1 cun.

Local, or with great skill, may be directed towards the area of discomfort.

Moxibustion: up to 5 cones.

Being at the upper end of the sternum it helps clear local problems but also those at the lower end, in the stomach organ or arising from poor eating habits, such as diarrhoea.

The name and use of the point are much discussed in several ancient classic texts, like the Yellow Courtyard and the Ode to Elucidate Mysteries.

Its position at the top of the sternum, the uppermost part of the structure of the thorax, gives it significance as the point touching Heaven (neck and throat) and yet made of Earth (bone).

Whether it really has useful psychological properties is not so certain, unlike the next point on the channel, Conception Vessel 22.

However, we should not ignore points with names of such quality. The ancients obviously thought this point was important. We just have to work out why.

Curcumin Benefits: How to Take Turmeric and Ginger

Turmeric/curcumin and ginger can change your health for good or ill! Make sure it’s for good!

Chinese medicine books are what you need to support studying acupuncture and Chinese herbal medicine. Also for Tuina, Guasha and 5 Elements.

Qi Deficiency: how to overcome tiredness

Qi deficiency: what causes this and how to overcome it? What does TCM – Chinese medicine – say, and what about tiredness after eating?

Element points lie between elbow and finger-tip or knee and toe-tip. They hugely enhance other acupuncture strategies but some acupuncturists ignore them!