Phlegm Colour says a lot about digestion and health

What does the colour of your phlegm say about your health? Burning too hot or too cold? OR something else?
Jonathan Clogstoun-Willmott

Before going into what phlegm colour means, phlegm is a major syndrome in Chinese medicine.

By the way … many other words also mean phlegm! For example, catarrh, sputum, spit, flems, snot, spittle, discharge – but not ‘MUCUS‘ which is a natural and necessary fluid in your body – see below.

You can read more about phlegm here, explaining why it can be such a nuisance.

I’ve also written a book about it: see my YouTube video for more.

What does your phlegm colour say about your health? And what does this mean from the point of view of Chinese medicine?

More important, what does Chinese medicine suggest you do about it?

I hope you’ll find this page useful, but if you want more information, a lot more!, I’ve written a book “Yuck! Phlegm!” about the best ways to deal with each kind of it, including an analysis of many of the different suggestions made elsewhere on the web: what works and what won’t work – and why it won’t work.

Your organic bodily fluids are vital for your health, in Chinese as much as in Western medicine. These fluids are the oil that keeps your body moving smoothly. They moisturise it, inside and out, they cool it, they carry nutrients to it and waste away from it.

Where are these fluids made? According to Chinese medicine, they start from your Stomach and Spleen energies – in effect, your digestion – working on what you eat and drink (not really so different to Western medicine!).

How they are filtered, purified and separated comes under other energy organs (zang-fu is the correct term), but they start with your Stomach and Spleen.

Your First Medicine! So … What went down your throat?

In Chinese medicine, you can sometimes alter the colour of your phlegm by eating different foods, if you go on for long enough. I don’t mean in the short-term, such as after eating something purple, like beetroot, you clear your throat and see your phlegm is purple: wait a few minutes or have something else to eat and your phlegm colour will revert to normal.

I mean that foods have energetic effects – which means some foods have a cold energy and some have a hot energy. Because these foods have different energies they’ll tend to produce different kinds – and colours – in your phlegm.

Equally, if you go on for long enough, you can often improve your phlegm colour with the right nutrition.

Often, but not always!

The colour of your phlegm depends on other things too, like what syndromes or factors are affecting your health in Chinese medicine. Two big factors are Heat and Cold.

How do Heat and Cold first affect you?

Heat and Cold affect your health by ‘invading’ you! Specifically, they enter by overcoming your body’s defences. In reaction, your body produces symptoms, which are its way of dealing with the problem.

They demonstrate where your body has put the problem: in particular, how far away from your vital ‘core’ it is maintaining the ‘dis-ease’.

Those symptoms are described in Chinese medicine according to a well-developed theory which goes back at least 3000 years, described in detail about 2500 years ago.

Acute reactions often come in one of two forms:

Chronic reactions take longer to develop and, being chronic, don’t easily go. That you have phlegm means – nearly always – that your condition is chronic. Why? To find out, you should read our page on phlegm. (Just some examples … it could be due to poor eating habits and nutrition, digestive problems or stress.)

Ongoing disease can do it too

Your body has a whole set of genetic or inherited templates to use when confronted by different diseases. They give it a huge range of options. Your symptoms show how your body is using its resources the best way it knows how.

Modern medicine has ways to ease the pain of these genetically inherited solutions, but if you read my page on Suppression, you’ll understand perhaps why sometimes you are better off allowing your body to deal with the problem its own way.

For example, if your body can clear the disease its own way, you don’t usually get stuck with what is called a ‘remaining pathogenic factor‘ which often follows the use of modern medicines like antibiotics.

These diseases can be acute or chronic. Chronic means that your body has given up trying to expel the disease (an acute reaction being its first line of defence), and has been forced to allow the disease to penetrate inwards to a deeper level where, with luck, it can ‘hold’ it and prevent it going deeper.

Acute diseases last a few days or, at most, weeks. Chronic diseases can last as long as you do, in theory, unless you get help and/or make a huge change in your life.

Where your phlegm/mucus appears from

Where your phlegm appears from makes a difference.

The more energy your body puts into defending itself, the more ‘vital’ will be your symptoms, including your phlegm colour.

‘Vital’ means full of life, which in the case of phlegm colour means vibrant, not perhaps an adjective you’d use normally but

The less energy it has to put into defending itself, or the more chronic its condition, the less coloured will be the  phlegm:

The longer it has been cooking, the darker will be the phlegm colour. So brown, even black, suggests a more chronic condition.

That brown or black phlegm might have been any colour before it cooked.  However, just as when you leave a stew cooking on the hob for too long and find charcoal when your return to it, so has your body been cooking your mucus!

Brown or black is not a healthy phlegm colour. Long-term smokers often have dark phlegm, coloured by the soot in their lungs.

Do remember that what you have recently eaten may colour your phlegm: this discolouration soon disappears, however. It is harmless.

Darker phlegm colours mean that your body has had phlegm for some time. It is trying to clear it with heat, but, just as charcoal in your saucepan stuck to the bottom of the pan can’t be shifted by applying extra heat, so also with your body. Your body can only clear this black stuff by hawking it up and out. It’s hard to shift. Probably some remains.

Phlegm Colour is one thing. What its consistency looks like is another!

The denser the phlegm, either the greater the Heat applied to it, or the longer it has cooked.

Just like on your stove, if you turn up the heat on a soup you are making, it will become thicker. Or you could put it on low, forget about it, and then be reminded only too late by the smell of burning, at which point the fluids have boiled away, leaving just solids, which quickly carbonise.

So, thick lumpy or stringy phlegm has been cooking for longer.

Smell or odour of Phlegm/catarrh

If phlegm/catarrh is clear and watery: ‘clear phlegm’

This is a sign of Cold. What does this mean? One or more of the following might apply:

If you always have mucus that is clear and watery, ie chronic:

What if phlegm colour is white?

White phlegm and sputum (especially if sticky) suggests not that you have great Yang deficiency, but that your Spleen and Stomach Qi are deficient. This produces, together with Kidney Yang deficiency, a condition called Cold-Phlegm’

Where does white mucus come from?

White mucus is typically coughed or hawked up or appears in your nose.

You can help yourself by

All these help to increase your body’s warmth, compensating for the coldness of the food. As your metabolism warms up it will produce less runny white phlegm.

White catarrh, like uncooked egg-white, is a step towards other forms of phlegm. It easily obstructs normal bodily processes and can become heated, leading to more highly coloured forms of phlegm (for example, yellow or green) with the additional problems they bring.

Try to clear white mucus before it changes to something worse!

The phlegm colour yellow indicates Heat. It might be a lot of heat, or only a little. The thicker, more sticky, more colourful, stronger-tasting or more smelly it is, the more heat.

Where has this heat come from?

What kind of internal syndrome?

What if the phlegm colour is purulent?

‘Purulent’ phlegm colour means containing pus. This may be yellow or yellow-green. The pus might contain blood, making it red.

Purulent phlegm colour is a step further down the scale from cold to hot, and indicates – if from the lungs – ‘Lungs Toxic Heat’. 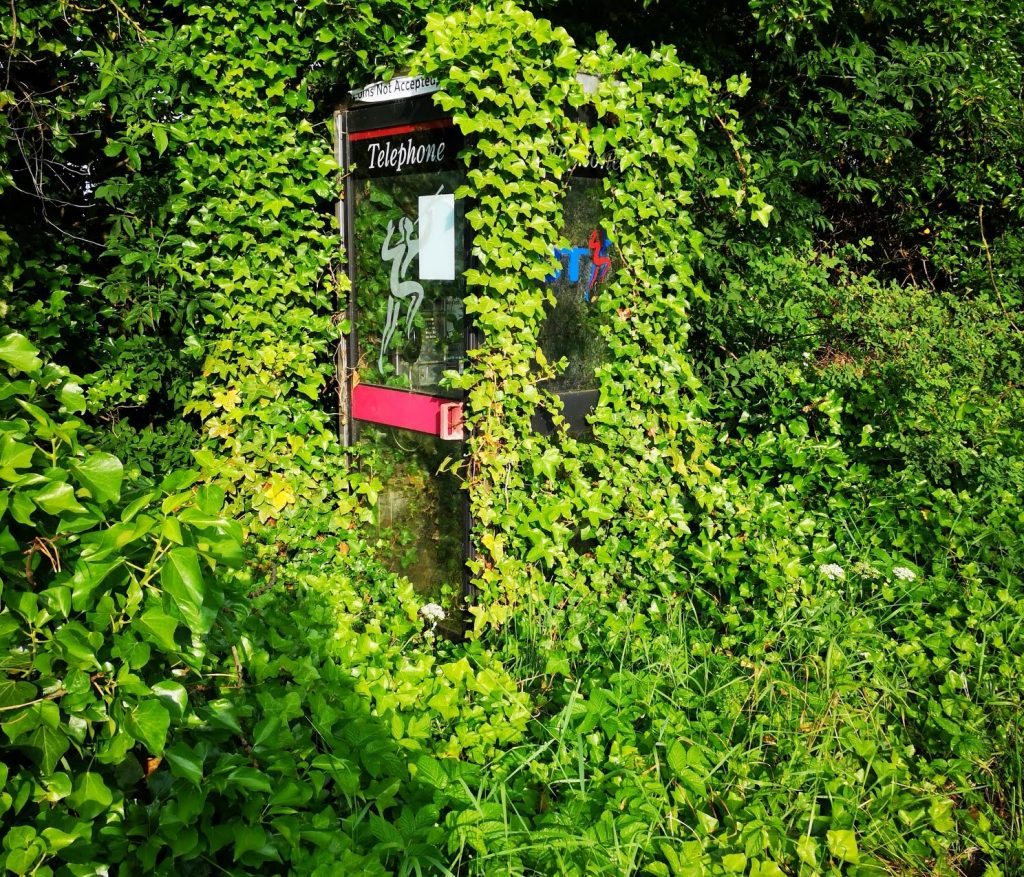 But not always: it could just be older. It depends on the vibrancy of the colour. The more vibrant the colour the more it suggests Heat and an active Phlegm-Heat or Damp-Heat syndrome. By ‘active’ I mean developing, growing, like the ivy in the picture above. For example:

As phlegm ages it goes darker. That your phlegm is not yellow, green or red means it is less acute, more chronic. With this brown or brown and green ‘mucus’ (ie phlegm) you have to accept that your body’s reactive powers are diminished. This stuff is older. So, besides whatever syndrome is diagnosed there is almost certainly some yang deficiency, probably being Kidney Yang deficiency and Spleen yang deficiency.

A red phlegm colour contains blood. Escaped blood means either that there is excess Heat or, occasionally, that there is Yin deficiency.

Or both, as may occur, for example, in end-stage tuberculosis.

In Chinese medicine, it can occur with Heart Blood stasis or Lung Heat for various kinds of Western diagnosed conditions including pneumonia, TB as mentioned, and pulmonary embolism.

What did I learn from this?

Air pollutants can cause black phlegm

Exposure to infection and your body’s reaction over time

What about hard phlegm chunks, coughing up hard mucus, or dark pellets of catarrh?

If there is redness in or round them, probably your lungs are bleeding: see red phlegm, above

Otherwise, the fact they’ve gone hard means they’ve been there for some time, slowly losing moisture and hardening the original phlegm.

Fortunately, your body now has enough strength to cough them up. So they may be from a former illness, almost forgotten, now expelled by your stronger body.

To make sense of them read what is said above about Black phlegm.

Acupuncture and Homoeopathy – which is best?

Between acupuncture and homoeopathy, which is best? Given the choice between these two great therapies, how do you decide?!

How to Warm Up if You’re Always Cold

Always poor circulation and can’t warm up? You need this page to explain why and what to do! Also, learn what NOT to do – important!

Fermented Food and your Liver

Fermented foods both preserve and enhance a food’s quality, add ‘sourness’ to you diet and help Liver and Gallbladder work better.

Common diseases listed are those you often ask about. Here’s how Chinese medicine explains them, and why it may help. Includes some syndromes, too.

Singing means different things to different people. It can be enjoyable and community-enhancing. What about for health and your mind?